Tryouts for the 2021-22 season are right around the corner!  Pre-register for tryouts today!  Click on our Tryouts 2021-2022 tab for all the information.

BALTIMORE ELITE IS ADDING BACK OUR BOY'S PROGRAM THIS SEASON!

Due to popular demand, Baltimore Elite is adding back our boy's program this upcoming season.  Tryouts will be held on Saturday, October 9 from 1:00-3:00pm at Roland Park Country School.

We are thrilled to announce some of our amazing position coaches this season.  In addition to your regular practices, we'll be running weekly position clinics throughout the season to give each player additional training and instruction by our experienced college coaches.  The schedule for this training will be posted online and emailed to each team.

Tim Walsh enters his fifth season at the helm of the Coppin State volleyball program in 2021 and is the winningest coach in Eagles’ history.  In just four seasons at Coppin, Walsh, the 2020 MEAC Coach of the Year, has won 40 matches while guiding four MEAC major award winners, nine All-Conference selections and the program’s first AVCA All-Region recipient.

This past season, one of the most challenging in NCAA history due to CoVID-19, Walsh led the Eagles to its first-ever winning season and Northern Division Championship due to a program-record ten-match winning streak and nine conference victories.

Walsh came to Coppin State after spending the 2015 and 2016 seasons at Marywood University as its head coach. He guided the Pacers to a 25-36 combined record and a 15-7 conference record in two years, including the program’s 400th all-time victory in 2015. Both of his teams reached the CSAC Playoffs and were named an American Volleyball Coaches’ Association (AVCA) Team Academic Award recipient. The 2016 squad, which saw two players earn All-Conference recognition, collected 17 wins which were the most for Marywood’s program since the 2013 season.

Prior to Marywood, Walsh served as the Head Coach at Francis Scott Key High School in Union Bridge, MD for six seasons. He led the Eagles to the 2A Maryland State Championship in 2009. Walsh led Key to a 66-18 overall record and a .727 winning percentage. The Carroll County Times named him Volleyball Coach of the Year in 2013. He coached two county players of the year in 2009 and 2014. Eight of his players went on to play collegiately and his 2012 team reached the Class 2A West Regional Finals.

Walsh is a member of the AVCA. He was a two-year captain and starter in the Empire State Games, Hudson Valley Region Men’s Volleyball Team and played in various clubs and leagues during and after his stent at Towson University. He was a four-year Division I, cross country and track and field letter winner and captain for the Tigers.

Coach Sanky Sanny is in his 3rd season with Morgan State University after spending  two seasons as a volunteer assistant coach at Holy Family University in Philadelphia, Pa. While with the Tigers, he worked with the team’s liberos and defensive specialists and helped the team compile a combined 52-16 overall record and a 33-5 Central Atlantic Collegiate Conference (CACC) mark in two seasons.

He helped guide Holy Family to a 31-6 overall record and 18-1 in league play, as the Tigers captured the program’s first-ever CACC title and advanced to the 2018 NCAA Division II East Region Championship match.

During his time with Holy Family, Sanny mentored CACC Player of the year, AVCA East Region Player of the year and AVCA Third Team All-American Chase Wassel. Sanny worked in numerous roles with the Holy Family volleyball program. He managed the day-to-day operations of the team, provided live, in-game statistics to the bench as well as pre-match scouting packages for the coaching staff for every game played. He was also responsible for statistical input using DataVolley as well as opponent scouting.

Sanny previously served as the boys’ and girls’ varsity assistant coach, as well as the junior varsity head coach for both teams at Abington High School in Abington, Pa., from 2012-16.

Since 2016, Sanny has also been the head coach at the Infinity Volleyball Academy in Hatfield, Pa. for 15U and 16U. He’s also a USA Volleyball CAP I certified coach, American Volleyball Coaches Association (AVCA) member, and a USA Volleyball High Performance tryout evaluator and court coach.

Sanny compiled a prolific playing career as an outside hitter on the Temple University men's club team, helping the Owls earn their first-ever Mid-Atlantic Collegiate Volleyball Conference (MACVC) title in 2015.

He would earn all-tournament Most Valuable Player honors in 2015 and helped Temple finish ninth at the National Collegiate Volleyball Federation Tournament in Reno, Nevada in 2014. Sanny has been a part of Kerala Volleyball League of North America since 2010 and toured all around North America and Canada playing competitively for the Tampa Tigers, a club team in Tampa, Florida.

Sanny earned his Bachelor of Science degree in athletic training from Temple University in 2017.

Coach Brent Whitehead served as the assistant coach at Stevenson University from 2010-2019 and worked with the women's program, men's program, and sand program.  He works primarily with the setters and middle hitters.

While with the Mustangs, the team has won six-straight MAC Commonwealth titles while advancing to seven-straight NCAA Division III Women's Volleyball Championships.

In 2011, the men's volleyball team finished with a 26-7 record and won ECAC South Championship in five sets.

Brent started his coaching career in 2005 coaching at Pikesville High School in Baltimore County.  Since 2005, Brent has been coaching both Junior Varsity and Varsity at St. Paul’s School for Girls under Kelli Wilkinson. During that time Brent helped lead the Gators to three A conference finals appearances, one A conference championship, a Maryland- DC Invitational championship, and a perfect 12-0 season.  Prior to coaching, Brent played club volleyball at East Stroudsburg University where he was a setter and a defensive specialist. He received his degree in Health and Physical Education in 2005.

Coach Whitehead is both Gold Medal Squared and IMPACT certified.

In order to better serve our Harford County families, Baltimore Elite has secured John Carroll for a practice facility this upcoming club season.  We plan on having 2 teams there this season.

Baltimore Elite will be running 7 weeks of Sunday Clinics/Open Gyms at Roland Park Country School to prepare for tryouts in November.  These clinics are open to grades 4-12 and players will be split up by skill level.  We'll have a beginner net, intermediate net, and an advanced net.  These clinics are a great way to meet our amazing coaching staff and to prepare for tryouts in November!

These clinics/open gyms are drop-in and you do not need to pre-register.  Just show up ready to play!

Congratulations also to 13 Navy and to 17 White for making it to GOLD Regionals!

Congratulations to 16 Navy for earning the club's first bid to AAU Nationals in Orlando, FL by winning the Antietam Grand Prix tournament!  So proud of this amazing team and coaches and excited for this opportunity! 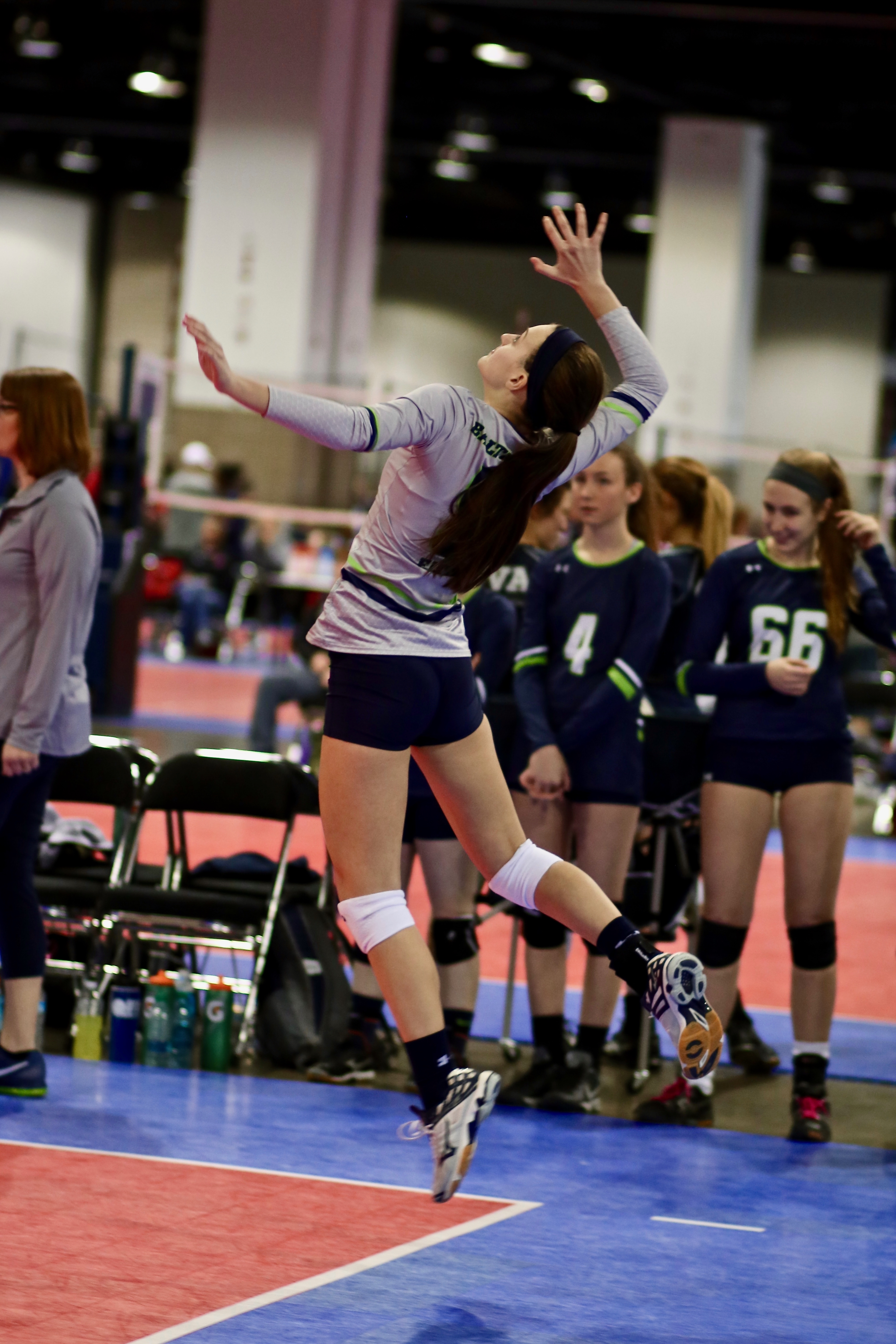 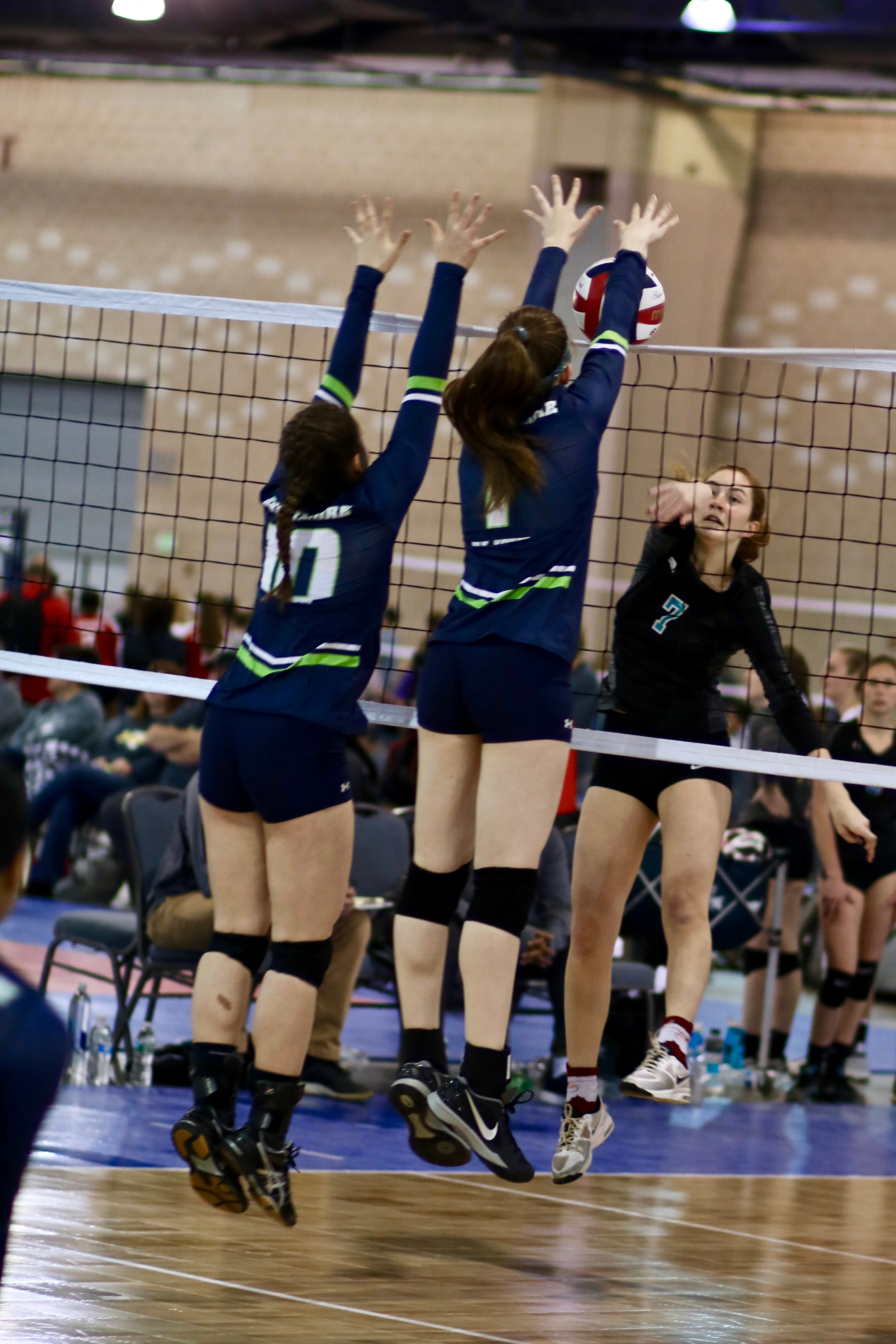 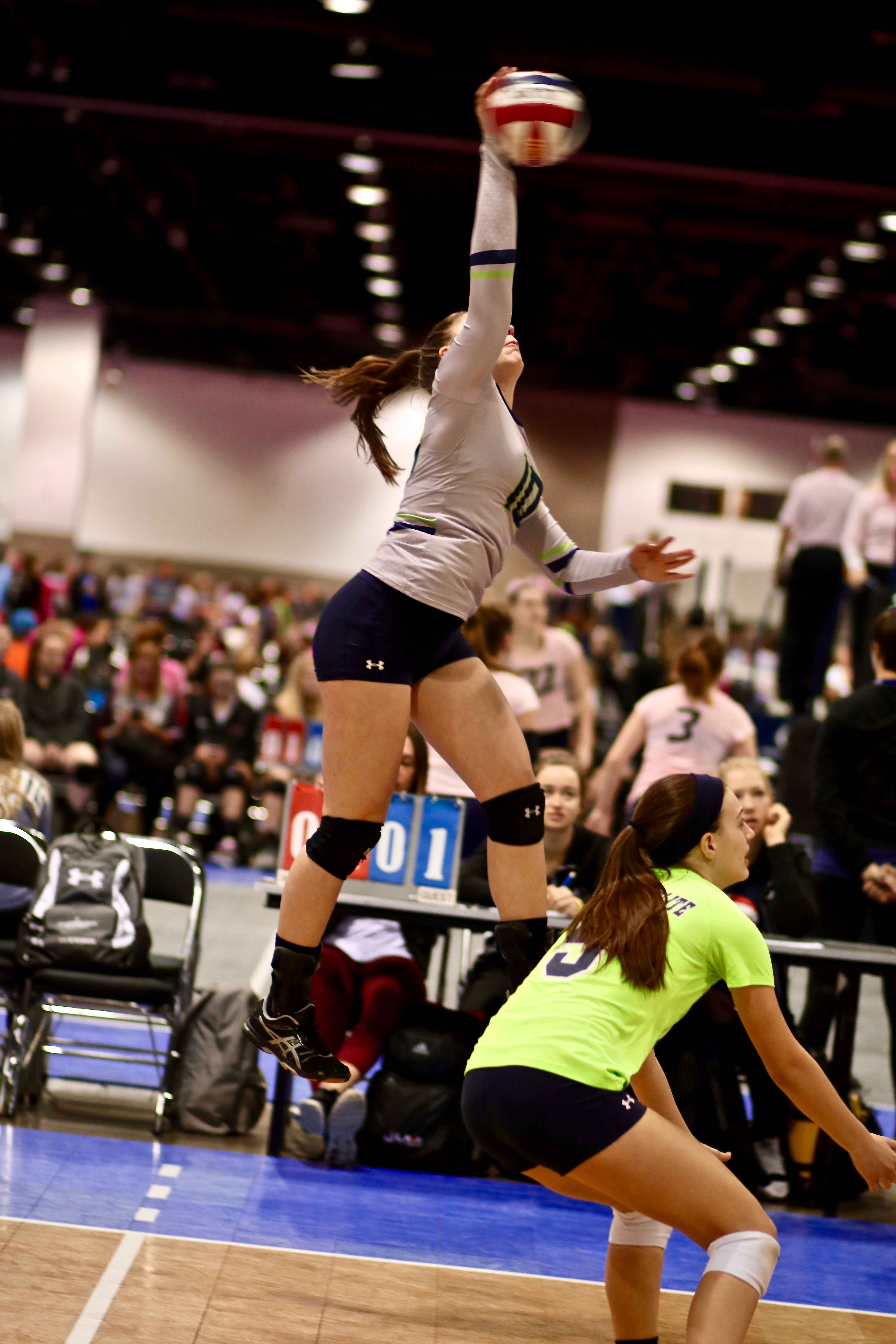 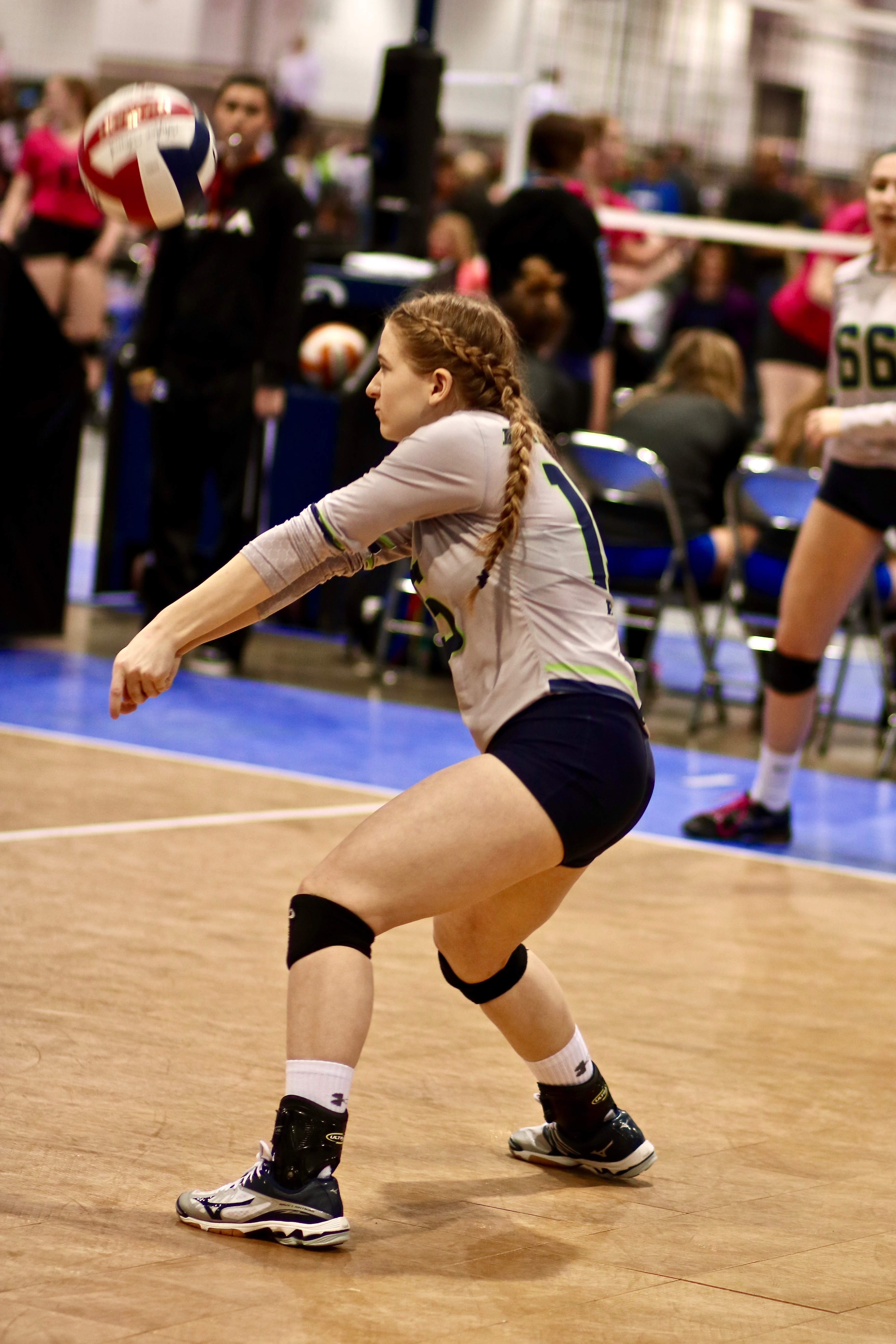 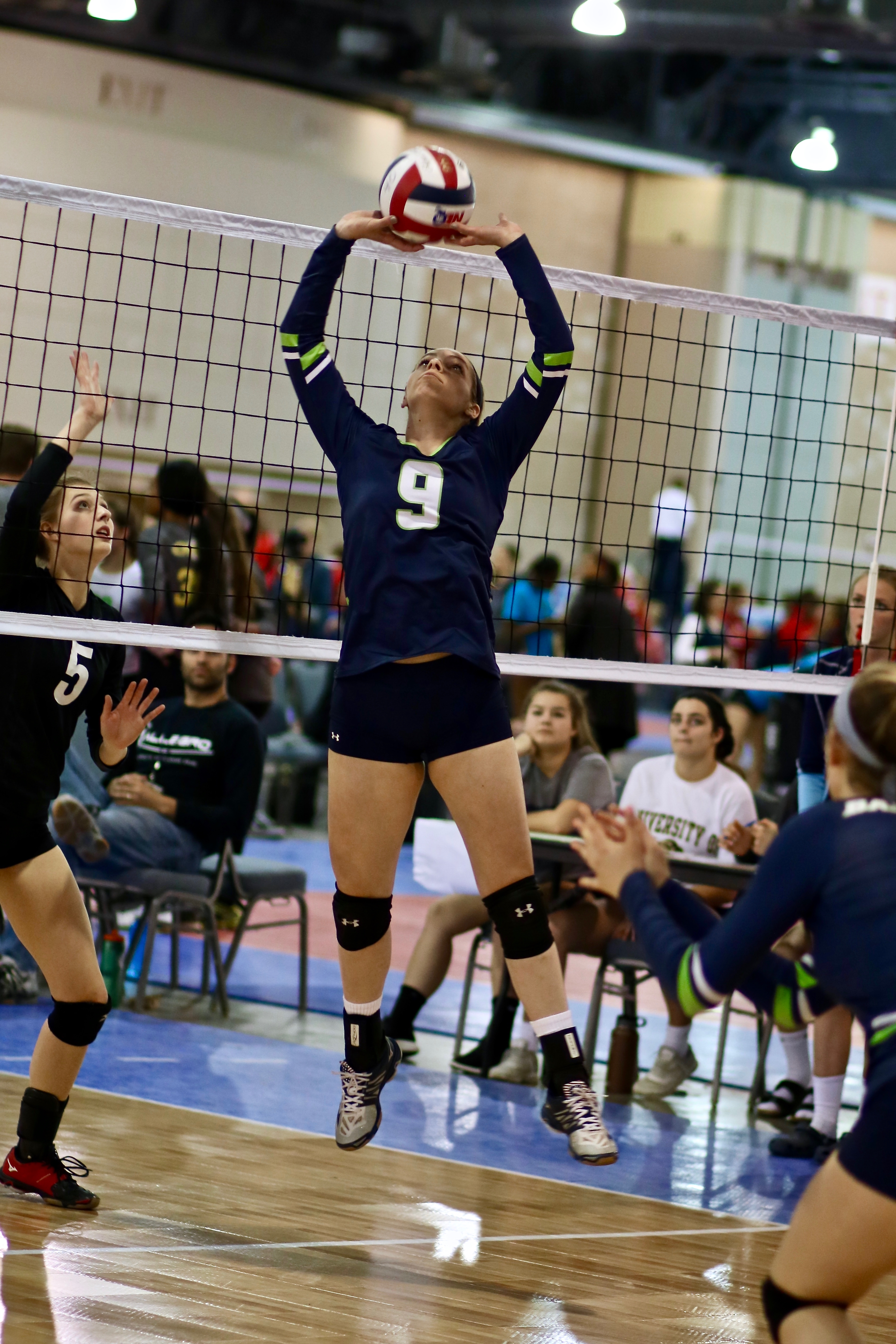